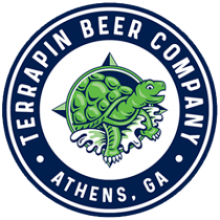 Terrapin Beer Co. began as a daydream between founders John Cochran and Spike Buckowski, who met while working for a microbrewery in Atlanta.

The two recognized that they had something to contribute to the brewing industry in the southeast, and began crafting recipes. In April of 2002, Rye Pale Ale made its first appearance in Athens, GA. Only a short six months later, Rye made it to Denver for GABF, where John and Spike took home a Gold Medal for the beer in the American Pale Ale Category.

In 2007, Terrapin Beer Co. moved into its current location on Newton Bridge Road in Athens, and set out to share its unique beers with its hometown and the rest of the Southeast. Inspired by the creative culture of Athens, Terrapin began to add to its beer line up, with unique beers like W-n-B, Hopsecutioner, and so many others. Today, Rye Pale Ale is accompanied by six other year-round beers, four seasonal sessions, and at least a dozen special projects, side projects and collaborations.

The company and its employees continue to live by Terrapin’s mission statement: to create unique experiences through the passionate brewing of the finest quality craft beers. Whether you’re joining us for a brewery tour at our tasting room, drinking a Hopsecutioner at your favorite watering hole, sipping some Hi-5 on your back porch, or enjoying a RecreationAle after a long day on the trail, we hope you appreciate the dedication we’ve put in for 14 years (and counting!).

What started as two guys and a 25 barrel brewhouse has grown into what is affectionately known as the Terrapin Tribe, that starts with our employees, our distributor partners, the folks that sell our beer, and of course, each and every person that has supported Terrapin’s growth as a brewery by drinking our beers!